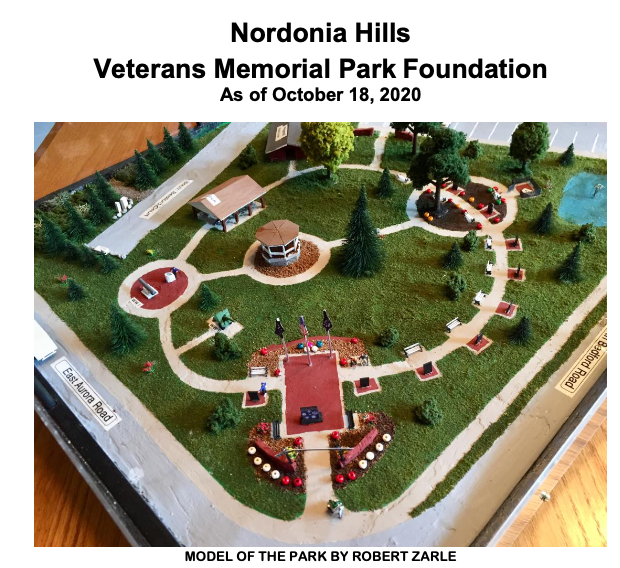 During this gathering, we are given time to reflect and listen to the important details surrounding Veterans Day – and a time for our entire student body and staff to come together to show our appreciation for the many veterans throughout our community.

To begin, our veterans are given a hero’s welcome into the gym to thunderous applause and the sounds of bagpipes. My grandfather and Navy veteran, Anton Blatnik Sr, said it was “An awesome surprise to see so many young people appreciating us old veterans.”

After the entrance, the Nordonia choir sings “God Bless America” and the Nordonia band plays each service branch’s anthem – and then we listen to a student and a guest speaker share their powerful messages about service and sacrifice. This year’s student speaker was fellow 12th-grader Jenna Jacofsky – and our very special guest from outside the community was the highly decorated Lt. Col. Seamus Garrett. Each spoke with great passion and received repeated applause as they discussed what Veterans Day means to them – as well as – the brave men and women who served our country.

In addition to powerful speeches, one specific part of this program that has always stood out to me is the reading and playing of “Taps”. More specifically, the lyrics “all is well, safely rest” resonates with me, as I think about how we can all rest easy and know that the “day is done” because of our veterans. Of course, these lyrics are followed by the haunting sounds of the trumpet echoing through the quiet gymnasium, leaving us all silent, as we remember those people, who gave their last breath in defense of our freedom.

For some in attendance, I’m sure this song brings back memories of friends and fellow comrades who have fallen and cannot witness first-hand the appreciation for their service. And for that, I am glad we give this time the appropriate respect and honor they deserve.

This year, too, I though a lot more about the veterans I have in my family. Both of my grandfathers served at different times. One served in the Army in Vietnam and the other served in the Navy during the Korean War. And even though they served in different eras, they both had the courage to act in the face of uncertainty and sacrifice the time in their lives to fight for our liberties. More significantly, for me as a high school senior, they did this when they weren’t much older than I am now, so that really hits home with me now.

As I continue to decide what college major and career path I want to pursue, I know that I want to do something to help and serve others. I’m not entirely sure how that will work out, but my hope is that one day I might be as selfless and courageous as my grandfathers. Through their military service, they taught me to serve a greater purpose than myself – and not to be afraid to take risks and act bravely.

President Calvin Coolidge said “The nation which forgets its defenders will be itself forgotten.” I know I will never forget our defenders and the commitment of our veterans. After four years of participating in this assembly, I have profound appreciation for veterans and this remembrance. I wrote this essay to reflect, honor, and thank all veterans for their service. And finally, how proud I am that the Nordonia Hills City Schools gave me this experience. It is because of lessons like this one that I know I will be prepared to think, work, and be willing to serve, no matter what career path I follow.

There will be events throughout the world to mark that historic date. The Veterans Memorial Park Advisory Committee has started working on plans for our community to also mark this day in history.

The conflict monument for World War I will be placed in the Park. The restored Great War Memorial, along with the 75 MM cannon barrel from that war, will be returned to the Park.

Help us make this happen as you did last year when we made our goal of putting in the entrance plaza and the main memorial. As soon as the weather breaks, we willl layout the key items. With that done, fill will be brought in to level the west side of the Park. Local veterans will be there helping and would be pleased to be able to talk with anyone that stops by to watch.

Photos of what has been accomplished can be found on the Park website
along with information as to how you can donate to the completion of the Veterans Memorial Park – www.nordoniahillsveteransmemorialpark.com

Phase One was completed successfully with the Memorial Dedication Ceremony on September 16. Many of you were there. We had close to 200 people in attendance. Again, thank you for all of the help you provided to accomplish this.

We took a break for a few months to recharge. Now it’s time to start again. As soon as the weather breaks, work will begin on the next phase.

This year a lot of ground work, including filling depressions and creating new contours to the land for drainage, will be done. New sidewalks will be added and a restroom built. The refurbished 57MM cannon and the WWI monument will be returned once the dirt has sufficiently packed. Trees and shrubs to improve on the landscaping that went in last year will be planted.

The War on Terror and the Vietnam War Memorials have been placed as part of Phase One. With your donations, we hope to start putting in the remaining war memorials: the Korean War, two for World War II, World War I, the Spanish American War, Civil War, War of 1812 and the Revolution. The goal is to not only have the Park dedicated to honor and thank veterans but be an educational experience for those walking through it to learn of the sacrifices made by them to defend freedom.

We are still in need of donations. Donations for pavers are still being accepted. Donations for benches and picnic tables are needed. The Veterans Memorial Park website has information and forms to aid you in making a contribution at any level including a link to our Go Fund Me website which is set up for credit card donations. If you have any questions, please call (216)703-6180 and Kathy will be glad to assist.

My team worked very hard and despite being told it couldn’t be done, we finished all elements for the phase one portion of the Veterans Memorial Park in time for the dedication ceremony on September 16th and it was a great event.

Phase One consists of the Memorial flanked by the VFW Post 6768 and the American Legion Post 801 granite benches, the Main Archway, the War on Terror and the Vietnam War Monuments each flanked by a donated bench, three flagpoles, and the inscribed pavers donated to date.

We will be updating the park website to reflect our accomplishments.

We are taking a break over the winter months.  We will still be accepting any donations that you wish to contribute.  During this short break we will start up our monthly informative ads after New Year’s 2018 when work on the park will resume.  If we can do as well with the fund raising as we have done this year, it may be possible to finish the park by the end of September 2018.

The Veterans Memorial Park website has additional information to aid in making a donation at any level to support this project including a link to our Go Fund Me website which is set up for credit card donations.  If you have any questions, please call one of the listed phone numbers and one of our AL or VFW members will be glad to talk with you.

Inscribed on the back of the Memorial

Inscribed on the Back of Vietnam Memorial

Inscribed on the Back of War on Terror 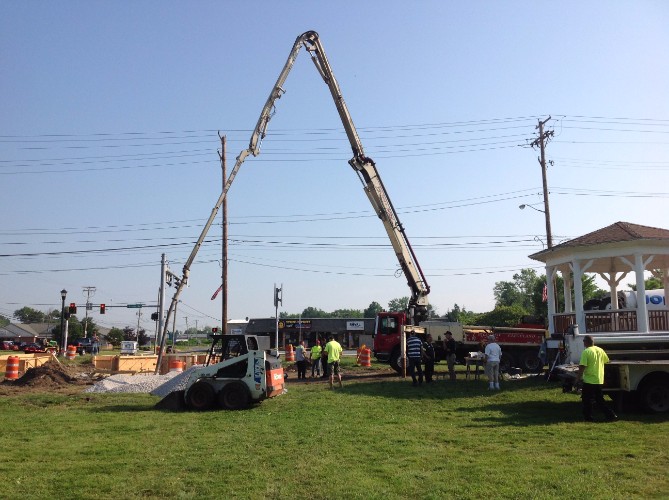 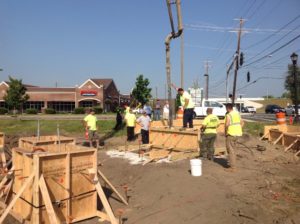 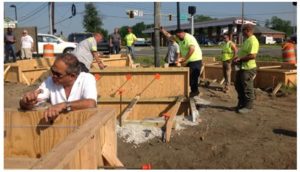 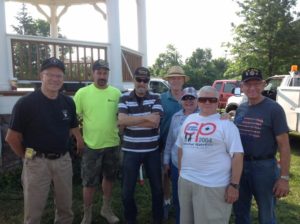 part of the Mayor Committee 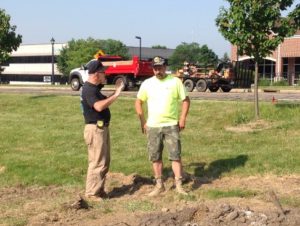 Great news!  On Wednesday morning, June 14th, we poured the footers for the main archway, the main memorial and the three flag poles.  The Service Director, John Hnottavange, and his crew: Ron Firem. Bryan Schumann, Jayson McRitchie, Jason Czech, Mike Debrouse, and Chuck Bulanda worked hard in the oppressive heat to get the 40 yards of delivered concrete in place.  The concrete was provided by Ioppolo Concrete at reduced rate and the pumper was provided by Hydracrete Pumping at a reduced rate because of the nature of the project.  This crew and a few others are shown in the picture.

After the forms are taken down, we will bring in the main memorial and place it on the footer and then cover it with plywood for protection until the dedication day.  Then the next step is to place the electric lines, junction boxes, water lines, and drainage pipes.  With that done the backfilling and grading will be started.  When that is finished, the main plaza will be poured and the paver’s installed.  The park dedication ceremony will be held on Saturday, September 16th. 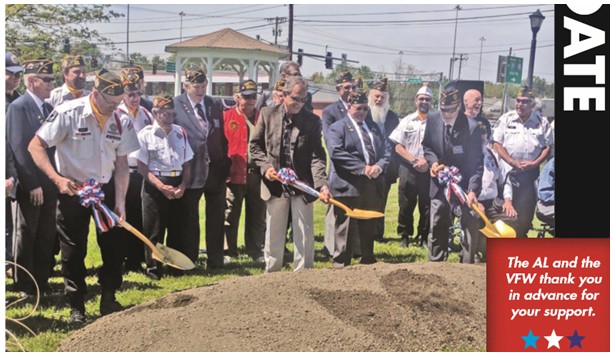 The Memorial Park Ground Breaking Ceremony at 2:00 PM on Tuesday, May 9th, finally marked the official physical start of the Veterans Memorial Park construction.  We are now reasonably confident that Phase One can be completed by mid-September.  We have picked POW/MIA Recognition Day, September 15th, for the dedication of the Veterans Memorial Park.   Going from left to right shoveling the ceremonial first dirt are representatives from the three organizations making this happen: Dan Davis, representing the VFW, Joe Migliorini, the mayor of Macedonia, and Dave Pristash, representing the American Legion. With the weather now in our favor, the mayor has assured us that the foundations for Phase One can be completed by the end of June.  That will allow us to begin the installation of the main memorial, the main arch, the three flag poles, the plaza and bricks and the War on Terror and Vietnam War monuments.